With the advent of the Jain Paryushan Parv the debate for food habits was ignited all over the country. The closing of the slaughter house for a day is ok but why should a carnivores be denied his pound of flesh. And also there are two sects of Jain Religion namely:  The Shwetambers and the Digambers. From what I understand with my limited knowledge is that the ban is just for the paryushan of the former and not for the latter. Why this differences after all they both follow the same god maybe in their own different ways.

Luckily for me I have grown up in a family where I had the chance to experience both Vaishnavism and Jainisim from close quarters. From my dad’s side came Lord Krishna and Durga Mata and from my mother’s side came Lord Mahvira. So we have celebrated both the Navratri’s and Paryushan with equal measure.

The only part where the religion restricts my food habits now is when I fast for two days during both the Navratri’s and when everything and anything that is grown under the soil disappears from our plates during the Paryushan, which for us would start day after and continue for 10 days and that also to be eaten before the sunset and that is it !!

Having studied in boarding school meat did form a part of my diet, it wasn’t a compulsion and I did opt for a vegetarian food there, but the bowls of meat were easily passed from one table to another. Then there was this Sher-e-Punjab restaurant at Madar Gate, Ajmer whose budget and quality fit into our pockets when we explored the nooks and corners of Ajmer on a Free Sunday. 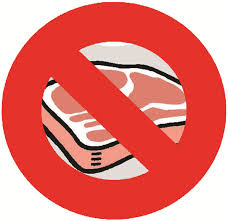 I must confess I am a very late convert to vegetarianism, gave it up after reading a book by Maneka Gandhi. Though didn’t follow it completely as don’t have the determination to go completely vegan. I am no card carrying vegetarian and ok with people having their meat. Have friends for whom no eating out is complete without a non-veg dish. Who am I to judge? To each his own, no one becomes a bigger or a lesser person by his diet and it is solely guided by an individual’s beliefs and religion. The deeds and the thoughts can never be dictated by ones diet. You are going to do what you desire and food isn’t going to accelerate that feeling no matter what , Period .

Each religion or sect is governed by its own codes and they don’t necessarily have to be alike. But what each is alike is in its message of compassion, love and brotherhood. There is this beautiful quote from the Film Sunshine which has stayed with me and it says “Never give up your religion. Not for God. God is present in all religions. Religion may not be perfect, but it is a well-built boat that can stay balanced and carry you to the other shore. Our life is nothing but a boat adrift on water balanced by permanent uncertainty. About the people whom you will judge, know this; all they do is struggle to find a kind of security. They’re just people, like us. Therefore you mustn’t judge them on the basis of appearance or hearsay.”

One thought on “Food and Religion”