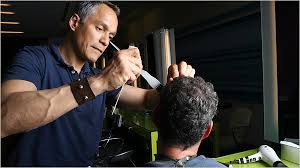 This Saturday evening just across the chair, where I was sitting while getting my hair colored at the saloon was an acquaintance getting his beard trimmed. We have been Facebook Friends since 2014 with 83 mutual friends as of today!! So while we were getting through the mundane tasks of getting ourselves groomed, we so tried hard in ignoring each other and not to acknowledge each other’s presence that we eventually succeeded at our stupidity !!

Well I am presuming that he knows me as well, as we have met and been introduced at some random previous occasion, and any ways Udaipur is too small a place to not know each other. The lack of acknowledgment wasn’t because of any kind of hostility but more to do with who is going to first break the ice. Well as for me I am happy living in my cocoon and wouldn’t make that move, so we just let the moment pass and triumphed in acting oblivious to each others presence.

During the initial phase of Facebooking I would get cheap thrills in adding up friends and confirming request without knowing them personally and then the issues of privacy started creeping and at the risk of offending people started asking them “Do we know each other?” when they would send ‘Friend Request’. In one such instance a person got so offended that he was just short of abusing me and claimed I knew him , well for me I couldn’t and still don’t recognize him. Moreover during that early phase people weren’t putting their real profile pictures so it was hard to place them because I am pathetic with names.

I am writing this because it is rare for virtual friendships to convert into real ones that has happened with me but that has been few and far in between. 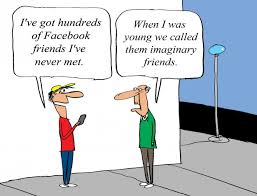 I have known people being friends with the whole world till they touch the limit of 5000 and wonder if even 10 % of these friends would acknowledge them in public. So lately have started pruning the list on regular intervals and removing friends who don’t respond to my posts, Guys !! if u get the hint better start acknowledging me in public ,  liking my posts and praising me unnecessarily if u wish to remain my “Facebook Friend”.

Well I too have been guilty of the same offence where in I have added people if I have found them interesting in terms of looks, humor or otherwise without knowing them personally. So if they give me back in the same measure, I would surely be disappointed for being ‘unfriended’ but such is life in the Virtual World !!

By the way , I am still undecided whether to unfriend that person I met in the salon !!