The cities we all live in has its own history, landscapes and enterprises. With each passing year there is bound to be changes in the above three and with it the pressure on its infrastructure that aid its inhabitants to function smoothly.

The city can be compared to our body that with age demands to be medicated, to be operated upon. Like is the problem with the modern medical advancements not all new procedures are necessary, a little tweaking of the existing options can go a long way in bringing our body to its past healthy state. Likewise not all modern infrastructure is one stop solution to improve urban spaces.

I use the above example to highlight the importance that is placed on Flyovers as a one solution that fits all to improve urban traffic. Flyovers have worked wonderfully well in Metro cities and have definitely been a blessings for the road traffic. But does this solution fit well for the problem that is being faced by Udaipur i.e. only if we face one??

We have been led to believe that the proposed elevated road a stretch of around 2 kms starting from Udaipole to Court Chouraha will ease out the traffic. The proposed cost of the same as of now is approximately Rs. 136 crores. The same was pegged at around Rs. 30 crores as per the information provided by the UIT officials to udaipurtimes.com on 12th March 2012 (http://udaipurtimes.com/delhigate-udiapol-flyover-plan-moves-a-step-ahead/). That comes to around 453 % jump in the cost in mere 4 years. So it is anybody’s guess what the actual cost of making this going to be!!

My objection to it besides the costing is the feasibility of making one especially with the turns and curves that are there at present on the route. If you see as the road appears on the Google Maps, you will notice that there are two steep turns dangerously close to 90 degree angle. On an elevated road a steep turn like this isn’t an accident waiting to happen?? Have we all not seen the same happen with the flyover passing thru Nathdwara?? 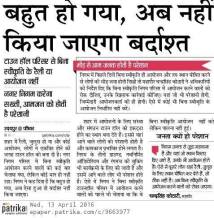 We actually face traffic only at two points on the route i.e. at Surajpole and Delhigate and that also for a maximum 2-3 hours in the peak time in the morning and evening. The traffic congestions most of the times is due to the rallies / procession making their way thru this main market. The administration has taken the right step recently to regulate this. Have just one suggestion that these rallies should entirely be stopped from being held during the peak hours and main working days of the week.

Another alternative to this elevated road plan can be to make alternative road network that can take away some of the load of this 2 km stretch. One option is to make a road parallel to this road passing through Agricultural College and coming out at Ashok Nagar Main Road. Won’t this be an economically cheaper than the proposed Rs. 136 crores and this option might even manage to take away some of the load of Durga Nursery Road?? Another option to ease out traffic could be to shift the Government offices from the center of the city as has already been planned, to the outskirts.

This elevated road passes through the Central Business District of Udaipur, this will not only lead to inconvenience to commercial establishment while it is under construction but after it’s functional it will bypass them entirely, leading to loss of business and revenue to everyone along the way. Shouldn’t the total estimated cost also include the above loss??

This decision needs to be relooked to make it viable / humane and by taking each stakeholder along the way. The Pros and Cons need to be further studied in detail. Udaipur wouldn’t be smarter by this elevated road but it will be smarted by providing smarter solutions to existing problems.

I am no expert in Urban Planning but just an Udaipur Citizen wishing to voice his concerns once again, as I had done earlier in one of my blogs. I may be proven wrong later but as of now this is what I strongly believe in and luckily I am not alone as some of the experts in this field too have raised concerns about this plan.

3 thoughts on “We Don’t Need No Flyover…”