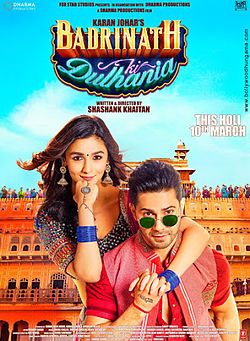 This is the latest rom-com from Karan Johar’s Dharma Productions featuring his find Varun Dhawan and Alia Bhatt and another ‘Dulhania’ series after the earlier Humpty Sharma.

So the story is based in small town Kota and Jhansi (what’s with the fascination with small town) and about a simpleton Varun Dhawan and a free thinking career focussed with dreams Alia Bhatt, their families , customs, dowry , premium on male progeny and likes. Whereas Varun Dhawan wants to marry, our heroine has other plans.

For a rom-com this movie for me neither had romance nor comedy, everything was just nice nothing great. With completely avoidable songs barring the now mandatory club and the end credits songs.

Watch the movie only for the earnest performance of the lead pair and the hero’s Best Friend Somdev. The movie could have been shorter by at least 20 minutes; by the end of the movie my son who seldom watches movies in theatre was bored to death.

I have been to Kota only once in my life time and it was nowhere close to the sanitised/ beautiful version they show in the film. Humpty Sharma was going after his Dulhania following the hit formulae of DDLJ but alas Badrinath didn’t have the same to fall back upon and succeed and entertain.

For me the Badrinath the Groom and Vaidehi his Dulhania are best left alone to themselves for some fun and frolic.

Disclaimer : No one needs to watch or not to watch a movie according to my reviews. Just because I spend few hundreds don’t give me the right to put down efforts of numerous man-hours and Crores of the team behind the movies.

But opinionated as I am will certainly publish this as well !!