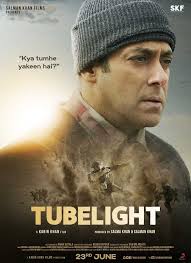 With Sisters, nephews and nieces in town, Tubelight seemed the perfect way to usher in the weekend with a 9 AM First Day First Show. After all it was an Eid release of Salman Bhai and everything else could wait. Despite being sleep deprived after a late night and some grudging member of the entourage we just about managed to reach the Cinema Hall in time. 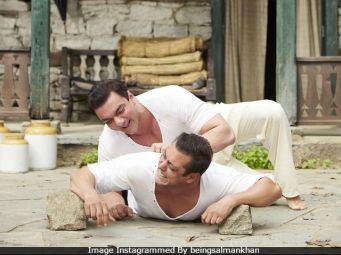 As the story line goes it’s about two brothers living in a small hill town in period starting from Pre-Partition days to the 1962 Indo-China War and their emotional connect. The elder one is good hearted intellectually challenged and the younger one is the protector and provider. The 1962 War changes it all as the younger one joins the army and thus begins the quest of the elder on to reunite with his brother.

These two are obviously Bhai and Sohal Bhai. With a brilliant supporting cast of Om Puri, Matin Rey Tangu, Zhu Zhu, Zeeshan Ayyub, Om Puri and the Superb Shah Rukh Khan. The young kid and his mother is the screen stealer and surprisingly Sohail Bhai for once is watchable and impressive.

Weaving human stories with arch enemies of India i.e. Pakistan and with this movies China seems to be forte of Kabir Khan: From Ek Tha Tiger, Bajrangi Bhaijaan, Phantom and now TubeLight. He raises the patriotic feelings and message of Bhaichara perfectly thrown in. Someone please make him an ambassador of ‘Aman ki Asha’ provided he isn’t already. He manages to raise some pertinent questions on being an Indian, slogan shouting of ‘Bharat Mata ki Jai’ and likes.

The sets feel lived in and surroundings beautiful and the characters of small town real and noosy. Though the war sequences to me seemed little amateurish and too simple. There is too much of ‘Yakeen’ happening for my comfort and too mush symbolic Gandhism thrown in which feels contrived.

Then there is Bhai: Salman Bhai. What’s with actors trying to get out of their comfort zones to prove a point with different roles and failing, case in point being Bhai with this movie? Bhai is beyond reviews/critics but that doesn’t give him a liberty to ham it up playing this intellectually challenged character. Somehow his acting reminded me of Hritik Roshan from Koi Mil Gaya, just a tad better. I don’t know if that’s the way the actors are supposed to play it but it just doesn’t work for me.

The movie works well minus the hammy Bhai but what’s a Bhai movie without Bhai swag and charisma. Bhai Fans the reviews don’t matter and for the rest this TubeLight shines but not too brightly !!