I remember seeing the first look of this movie ages back in which Rajkumar Rao is seen wearing a wedding turban and I thought this movie is going to be similar to the films being based in small town India. Well I was right about that one but the movie was nothing like what I had seen earlier.

This film is about a small town – Chanderi that is haunted by a witch who abducts and kills men during an annual four day festival leaving behind just the clothes of the victim. The only remedy to this problem is to stay indoors in the night with a message for the STREE i.e. The Witch written on the walls of each house of this town. Like all the small town movies there is this protagonist played by Rajkumar Rao, his buddies, some unusual characters thrown in mouthing hilarious dialogues and then there is this mystery woman played by Shradha Kapoor for whom our hero is besotted by.

The film is scary and also left me splits in most parts especially the scenes when the village’s Mr. Know-it-all played brilliantly by Pankaj Tripathi is trying to find ways to get rid of that witch. We also have a friend of the hero who gets possessed by the witch and how he is being contained. 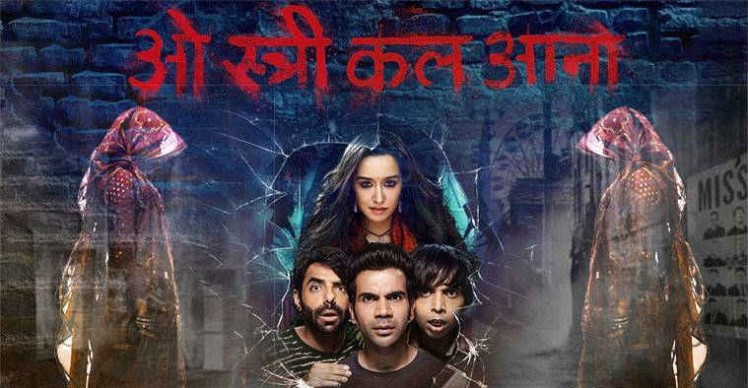 The movie belongs to Rajkumar Rao who has graduated from being a Saree salesman in Bariely Ki Barfi to a Ladies Tailor in this film and whose clientele is spread across nearby 3-4 towns so we are told. Only he has the skill set to play this small town simpleton with such earnest. He is cocky, goofy and funny in the film. He nails it when he is asked to show love towards STREE and despite being shit scared he looks into her eyes and tries to woo her in Shahrukh’s trademark style. There is this another scene in which his father tries talking to him about the adulthood and rising hormones.

STREE is brilliant example how clever and funny writing and brilliant ensemble cast can lift a plot that may seem wafer thin but when put all together delivers a great film watching experience.

TRIVIA – We were seated in a row where there were a couple on both sides of our seats. One was busy clicking selfies and holding each other’s hands (No, I didn’t witness anything more) and the other couple made me feel as if I was in an echo chamber as they were repeating / pre-empting all the brilliant dialogues. This so reminded me of the good old days of single screen theatres in Udaipur, only thing missing was the company of cats/rats and the samosas.